Working in videogames and with videogames has been a goal of mine for as long as I can remember, though it is in writing that I feel more confident in, that is capable of doing a good job as I hope to be apparent by this blog I tried very hard to get involved with video games as soon as I could. From the time I was 12 up to…well I’ll be honest a couple hours before writing this article I practiced and tried to do a large number of tasks related to game development. Coding, sprite editing, chiptune making, heck, even 3D modelling none of them are quite things I’m good at, not yet as I haven’t practiced enough but soon enough my knowledge of If Statements and while/wend will no doubt improve.

But you know bragging about my nonexistent skills in terms of video game development was not the reason I started the post with this intro, but rather to paint the image that while videogames were my passion, and making and developing was something I knew I wanted to do I had a very neat vision of what it would be like to work in the games industry. No, no rows of data, no code, not even blender open, instead it’d be all playing video games. As a translator of course, I’d privy to even more complete games, after all how could they expect me to deliver a product if I don’t play through it?

Yes, that childlike vision of localization was very quickly dispelled. Working with companies who have you under NDA, or indie companies who offer you all the support they can provide when it comes to a better localization, the truth is that the scenery and settings don’t really change. Now, I may have exposed this in the past but the truth is that often times a job translating video games looks a lot like this: 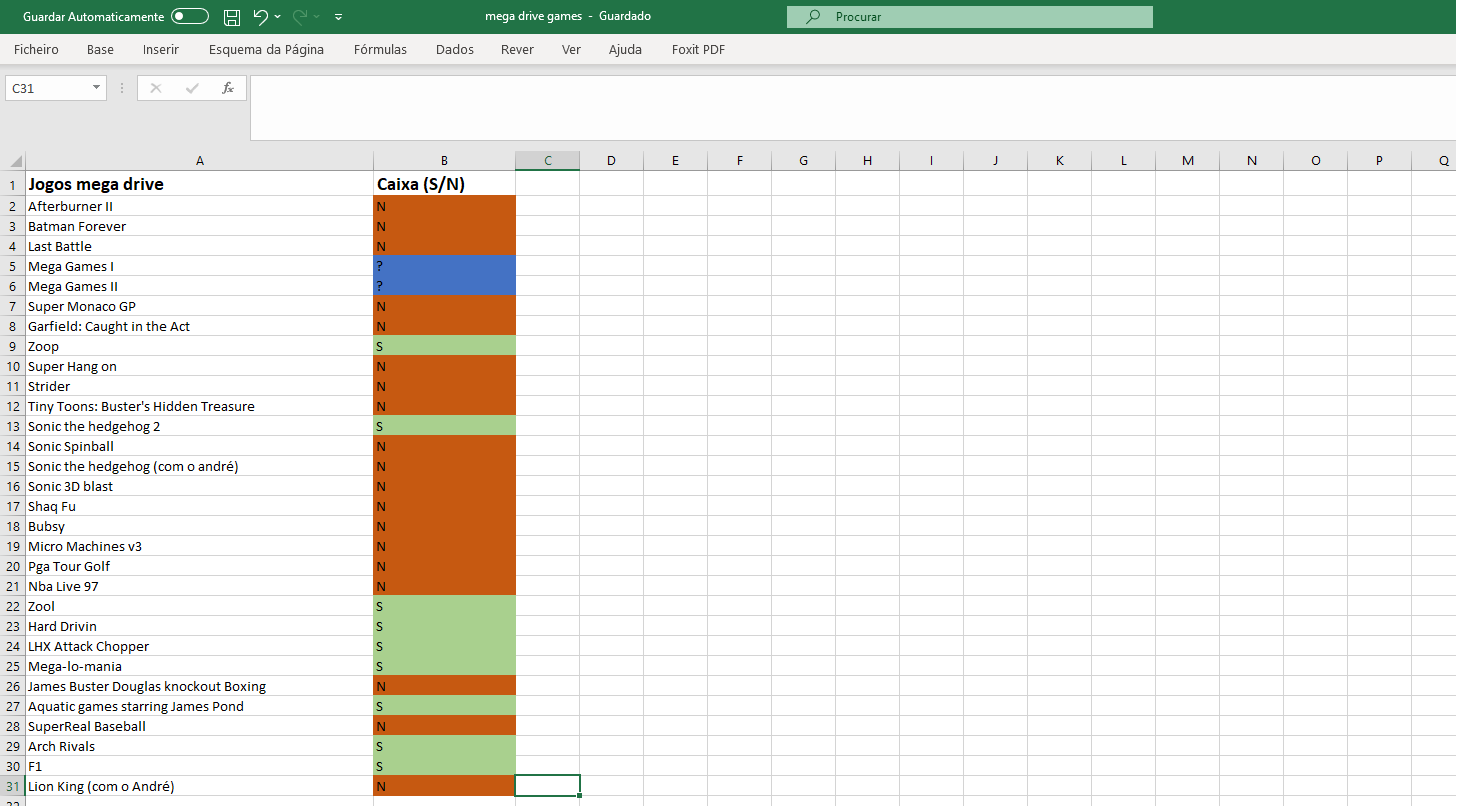 That is not, obviously a real project of mine that I’m translating because I can’t really show those. It’s a list of mega drive videogames I own currently, and the reason I show it is not to brag or complain about my lack of some real gems in there, but rather to display an example of what a video game localization looks like.

You might be looking at it, perhaps without understanding what the S/N means and be ready to point out to me, it’s just Excel! That’s something you find yourself saying and to that I would reply with….Precisely.

That it’s just Excel is exactly what I want to get at, because often times a translator’s job can be described as such, some kind of sheet, source text on the left, the translation to the right, make each little “square” match up, taking into attention stuff like size and or relevancy.

And that is of course where the problem often starts. Allow me to introduce the topic for today’s deep dive of Disney Pixar Cars, context or really lack of it.

Imagine if you will that you’re given a list of terms without context, or hell even an explanation on where and how they’re going to be used. Someone comes to you, hands you a printed document with a list of terms, or common ones whichever and says “Now how do you say this?”

It depends of course on context. But you don’t have the context for it, not really, and so you must do your best to translate it. Remember the childhood dream of playing through video games in order to translate them? Yeah, the Excel reality is so much more common, and I’d wager you likely won’t ever play a video game before translating it (unless it’s already out and it’s a patch.).

It makes sense if you think about it, most localizations ocurr in products still not released, you don’t tend to release a dub or localization of a major Triple A video game a month after. No, someone has to write the dialogue, localise the lines, and then someone has to record them and someone has to sync them with the gameplay. And one might think that one needs a look at the cinematics in order to do that, but a lot of the time that isn’t something you’re offered.

One of the more famous cases of localization without context killing a good localization happened with Pokemon Red and Pokemon Blue, or really Pokemon Rojo y Pokemon Azul. The Spanish version of the first generation of Pokemon games the translators were given only a list of terms without context which had an…interesting effect. 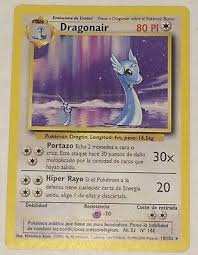 Take a look at the image above, What you can see is the move “Slam” in Pokemon being translated as roughly “slamming a door” or “door slam”, now why do you think that happened? Is is just that Spanish doesn’t have a word for slam(ming into things)?

Of course not, but when the translation team was given the word slam without any context whether it was a move, an action done by a character, a dialogue option or anything else they had to decide on a meaning to use. And without context….well they failed. And it carried over for over ten years across all merchandise.

Which brings us to Disney Pixar Cars and it’s interesting battles with context. Take a look at the screenshot below… 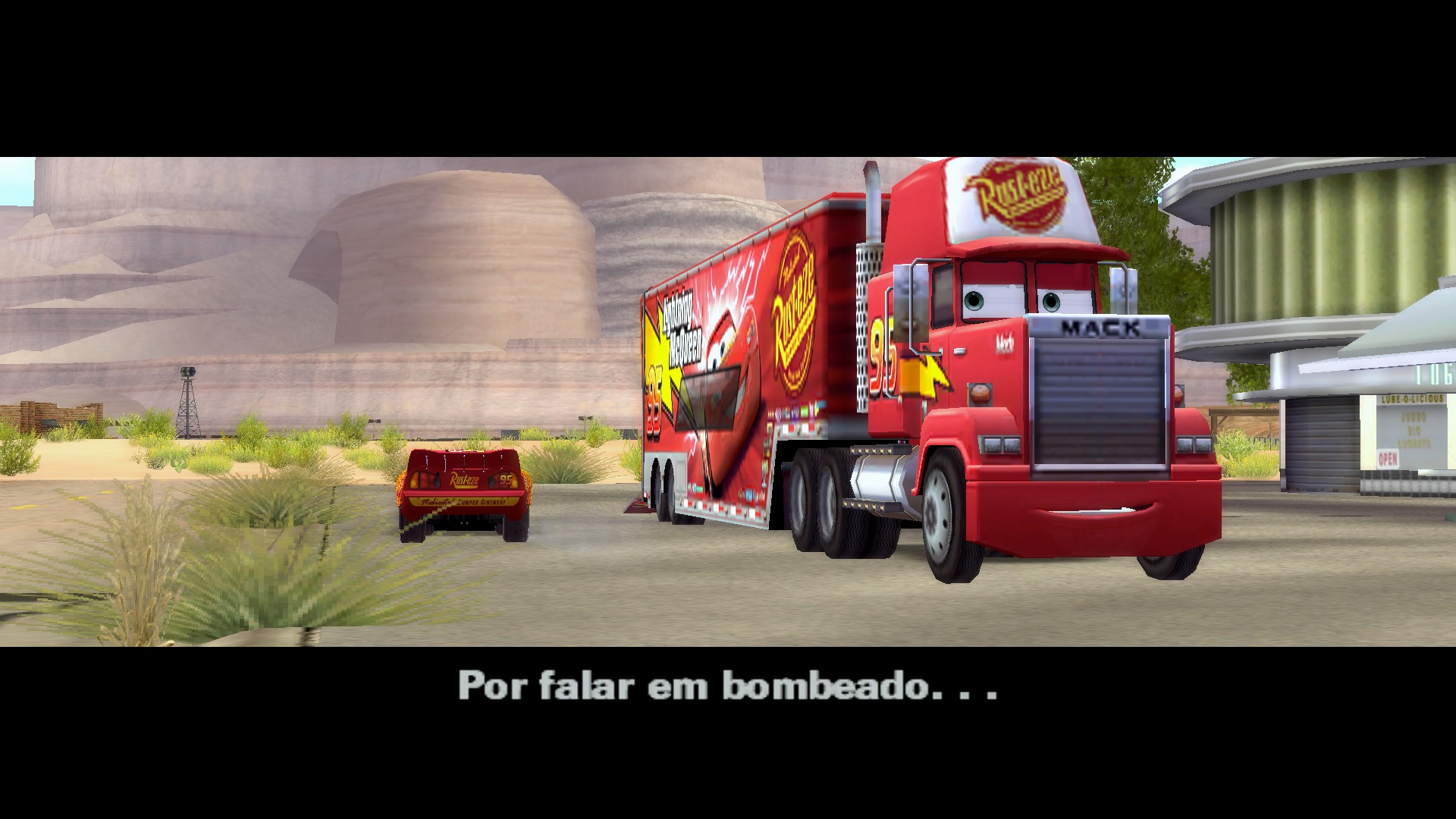 Now the original line references Lightning being seriously “Pumped up” for the upcoming race that’s to follow the cutscene. We’ve talked about expressions in the past, in fact it was the last part of this Deep Dive and this is yet another one. It means to be really excited for something, to want it to happen already, to feel ready for it. “I’m really pumped to see my favorite team play on the telly tonight” or “I’m pumped! Ready to take on the world”, considering that Lightning is a racer who is set to participate on the race the moment is meant to display that he feels ready for the race, excited even…

It is the kind of expression where you use an exclamation point, and yet the word pump also has another meaning, one that just so happens to relate to cars and, in the world of Cars, can mean something else.

Yes, the translator translated pumped as “getting filled up on gas”. Now I don’t know them, I don’t know how and why they came to that decision but I imagine it went something like this. They’re translating this not from the cutscene or even from the game, but rather a long list of strings, they see the words pump, and they know only that they’re working on a Cars video game. The connection gets made, and without context they can’t know whether they’re right or wrong.

It’s a problem I’ve faced myself. Imagine you’re translating a line like “Pony Slash”, now, as a pony fan it’s totally possible to me, and downright acceptable that this is a slash done by a pony, maybe one holding a sword at their mouth, rushing at you ready to defeat you. The alternative of course is that it’s a Slash done at a pony enemy, like some sort of centaur monster, maybe. Then again…it might just be the name of a move in the game and have nothing to do with ponies, it could be a real fast slash, so fast it’s like it runs on horsepower.

Without context you can’t know and that really messes translations up.

Another issue that can quite easily come up happens when the text doesn’t match what or how the character is saying it. Look at the image below. 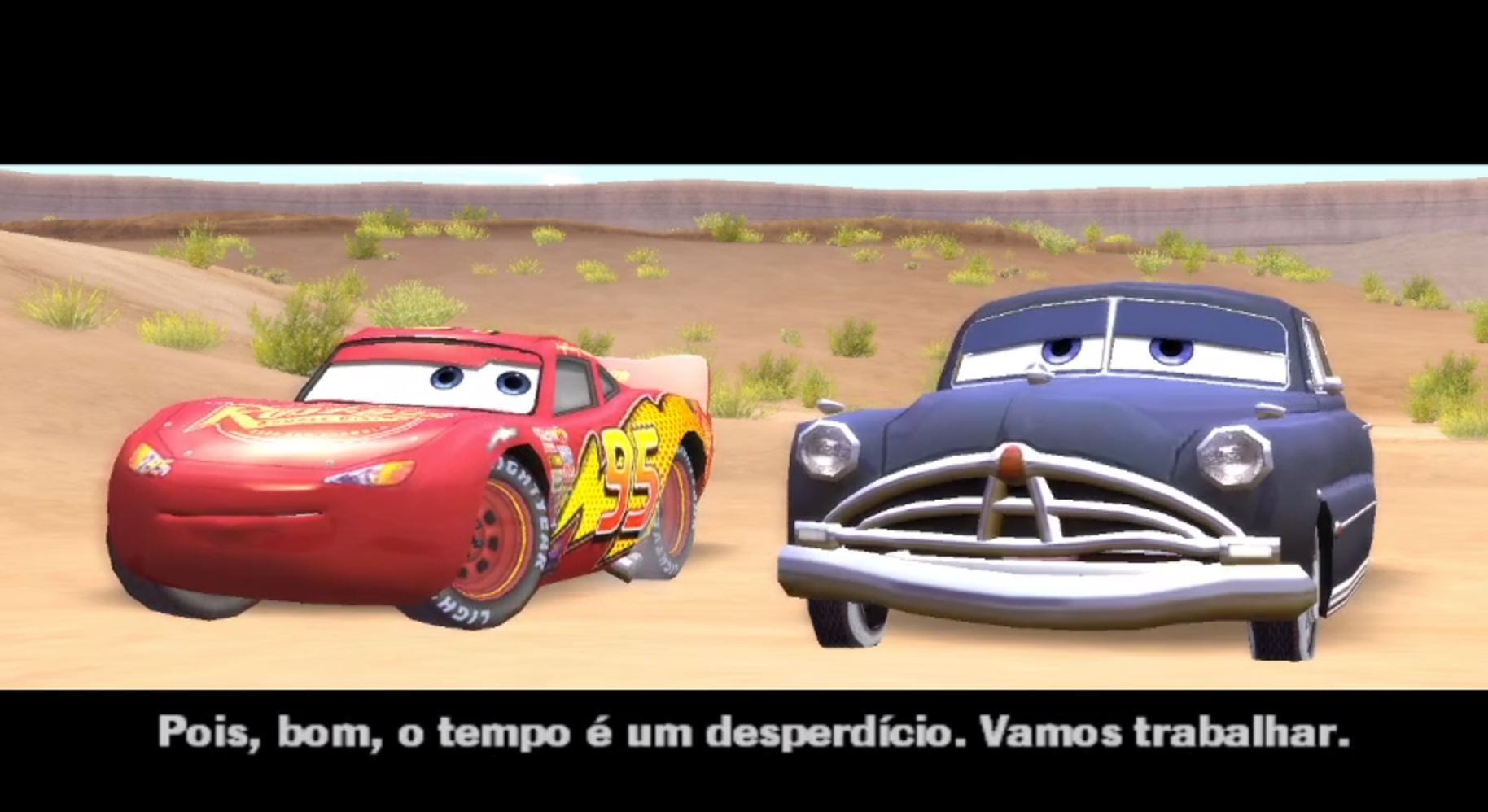 “O tempo é um desperdicio” would better be translated as “time is a waste”, which I believe is likely what the line would be read as. Perhaps even how the line was written on the script.

In reality what the character said, Doc (the blue car), was “Time’s a wastin'” meant to be heard as “time’s being wasted, you’re losing time…” not as in literal “Time is a waste”, as in time being a meaningless concept which ages and hit us all…that might be just a bit too heavy for a children’s game.

But again if the translator had heard the line themselves they’d likely caught the error, they’d know that “time’s a wastin” is something entirely different from “time’s a waste”. Without being able to hear the voice over clip? They had no chance for that.

In Portuguese, funnily enough reversing the position of the words would have the desired effect. A “Desperdicio de tempo” is a waste of time, “Tempo é um desperdicio” however says time is a waste.

And that – that is something which is just a bit outside the scope of the Cars videogame, or really, even this Deep Dive.

It is food for thought though…

<< Read the previous part of this Deep Dive here!