A BRIEF PREAMBLE BEFORE THE ACTUAL REVIEW:

The following was a guest review at Real Otaku Gamer I wrote upon being provided a review key. I mention this not only to assure any readers I have who actually want to read about more than translation despite the title of the blog that yes, I am still alive (not having written anything in months notwithstanding, or because it was part of my agreeement to mention the website when I crossposted it to my own blog (though it was) but also to explain any weird editorial things with how the text is illustrated and written. Really, an overly long, complex and probably run-on sentence aside Real Otaku Gamer does some good work and I enjoy their content. With that being said, here’s my review of How Buddy’s Parents Met and I can assure you that more content for the blog is on the way. Some of it is even translation related! 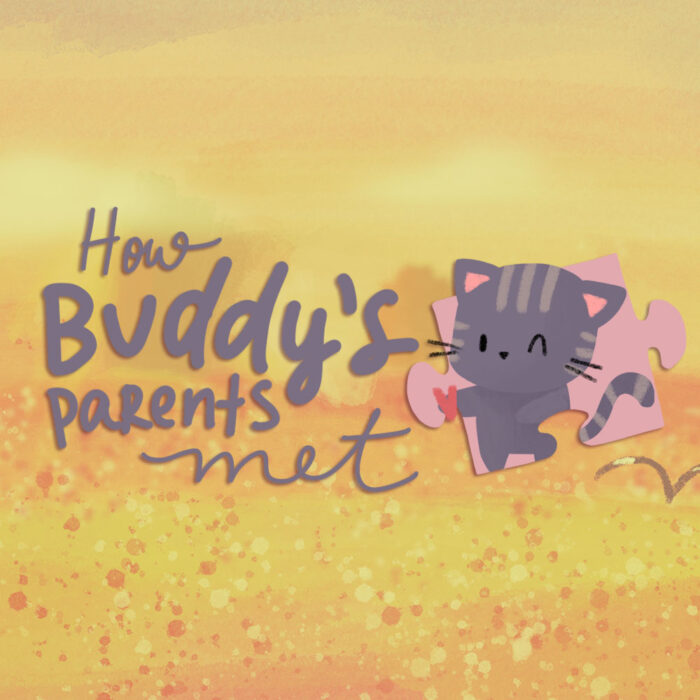 Some of my earliest memories were of playing puzzle games. Be it because they were simply to program in an era where shockwave flash games dominated or because my parents saw them as child friendly – in comparison to other flash games, I would later find on sites like Newgrounds they were a constant companion to my game time on pc. It was a format well suited to the platform, clicking and dragging pieces was something I could accomplish easily with the mouse and, much like Real-Time Strategy Games or Management games, it was a type of game I didn’t see working very well on consoles.

So when I was provided with a review code for How Buddy’s Parents met I was a bit concerned. Sure technically playing as I did on a Switch Lite I had a touch screen, which brought to mind jigsaw puzzles in mini-game compilations on the DS, which had worked surprisingly well. But I had also had my fair share of terrible Jigsaw puzzles video games over the years, as those tended to end up in the bargain bin rather frequently and they were all I could afford. Be them in the form of PSX or PS2 games Like Dalmatians 3, or Wii games where the motion controls struggled to work I feared for the worst.

But I needn’t have feared. How Buddy’s parents met isn’t perfect – and if you make it so puzzles are hundreds or thousands of pieces big you will probably find yourself lost but what concessions it does provide, and how it remains aware at all times that it’s on the Nintendo Switch makes it a remarkably solid experience. 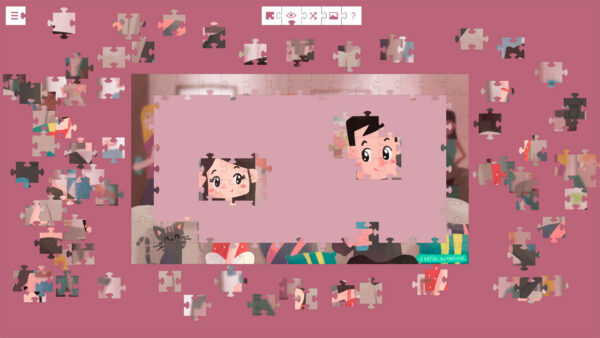 It’s a calm and relaxing experience. I would have called it quiet and introspective were it not for the background music and sounds that play. It’s forgettable music, designed to fade into the background as you focus. Certainly not designed to be in anyone’s Spotify playlist but it does its job surprisingly well. As I found myself spending half an hour or more on a puzzle, because I was nothing if not eager and selected the biggest piece number available as an option I eventually stopped noticing it.

Not that there’s much to say about How Buddy’s Parents met. I had a good time with it, and I would recommend it, but I also have previous background in building jigsaw puzzles and sitting for hours trying to find the right piece. Experiences where I spent my Saturday afternoons with my mother or grandmother building the same jigsaw puzzles we had built a dozen times before, so much that the pieces barely fit together with how they were bent (being cardboard) and there was always one piece that managed to sink behind the sofa cushions or under the rug. How Buddy’s Parents met appealed to me, but it appealed to me as a jigsaw fan and I can’t help but wonder if it would have been as effective a game for me to have fun if I didn’t have that background.

Not that the fact that this is a video game doesn’t augment the experience. Besides the music once a jigsaw is completed the image comes to life. It’s nothing more than some simple animations but looking at completed puzzles afterwards it sure felt like a nice reward. As a video game, there are also options that assist the player in finding that last piece, or in locating where a piece goes. It wasn’t something I used often, because I’m nothing if not stubborn, but with a mere click of the button it’s possible to see a faint shadow of where pieces should be and with yet another, it’s possible to see the image you’re trying to fill in.

But the better thing brought about by the game being a video game is the auto-placement. Now with a name like auto-placement you might think that the game plays itself, and you might be wondering what the point even is. But that’s not what I mean by it. 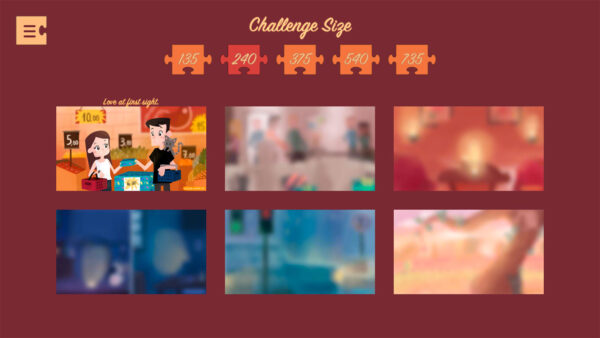 There are times when completing a jigsaw where you have “blocks” of completed parts of the larger image, separated by one or two pieces. On the one hand finding those pieces provides a flash of joy, especially when it’s a piece you’ve been searching for across hundreds of others for hours. Like a light turning on, at everything coming together. But on the other…well there’s a problem with that.

Because while building an image you’re mostly guessing at locations and exactly how big the puzzle is oftentimes those blocks are placed too far up, or too far left or…well entirely in the wrong spot. When trying to connect blocks of completed pieces to other blocks it’s not uncommon to have to break some of those pieces apart so as to make sure it fits,

Pieces clicking into piece once in the right spot fixes all of that. There is an easy way to cheese it thanks to it, of course. One can pick a piece and drag and drop it across every inch of the board until it snaps into place but that quickly becomes tedious. Not that navigating the board where the puzzle is being mounted is hard, with a click one can alter the level of zoom so one focuses only on a certain portion or sees the entire thing but cheesing a puzzle kind of defeats the point. Sure, watching the tale of a kitty, and the cute animations might be reward enough for some (and though limited the animation really is adorable) but one doesn’t play a jigsaw puzzle to “beat it”, one does it for the satisfaction of see it coming together.

Because to me, jigsaws are wildly nostalgic, but I’m aware that they’re niche at best. Much like how there were a dozen or a hundred jigsaw games made in flash while I was growing up, a constant companion to me alongside sliding puzzles there are several jigsaw games on the Nintendo Switch. And I’ve played a lot of them because once again much like those physical boxes gathering dust in the bargain bin several of them get heavily discounted on any E-shop sale but the best thing I can say about How Dusty’s Parents met is that it doesn’t forget that it’s a video game.

Sure it doesn’t have the social component, the screaming, everyone looking for pieces only for it to be in your sister’s hair somehow, or putting a piece that “seems right” in one place only for it to be at the entirely wrong spot, something you only notice as the puzzle is nearly done and that piece looks out of place but those were concessions made to make it a video game. The ability to decide how many pieces you want a puzzle to be, so you can make it a simple 50piece puzzle you solve in 5 minutes or a 1000 piece puzzle you can spend hours in silence focusing on, sound off, laying in your bed and playing it late at night and the numerous decisions made, be it in terms of control, be It in how far you can zoom or how you can preview the image at any time make it a far more convenient way to do puzzles.

Some of my most treasured memories are of me and my mother doing puzzles, and the rules she taught me with jigsaws still stick with me to this day “start with the corners then the edges” being key amongst them. I will never get those days back making 200 pieces puzzles of Bart Simpson, or, later dragging everyone the day after Christmas to help me with a 5 thousand pieces one I had gotten the day prior back. But as far as Jigsaw puzzles go, it captures much the same feeling of satisfaction when everything clicks into place and with more than a dozen puzzles, for the price it’s at it’s not a bad purchase at all. Plus, it’s kid-friendly. I lost track of the amount of times my sister started a 500-piece puzzle with me only to get bored 20 minutes in but with the lower amount of pieces I got her to finish one or two and to, later even admit it was fun. Even if she returned to Tik Tok right after.

So, be it because of convenience, price, or just portability (seriously do not open a jigsaw puzzle while travelling by bus or train), How Buddy’s Parents met does its job remarkably well. It’s a definite recommendation from me, even if only for those who, like me, love quiet afternoons piecing it all together.

So, be it because of convenience, price, or just portability (seriously do not open a jigsaw puzzle while travelling by bus or train), How Buddy’s Parents met does its job remarkably well. It’s a definite recommendation from me, even if only for those who, like me, love quiet afternoons piecing it all together.